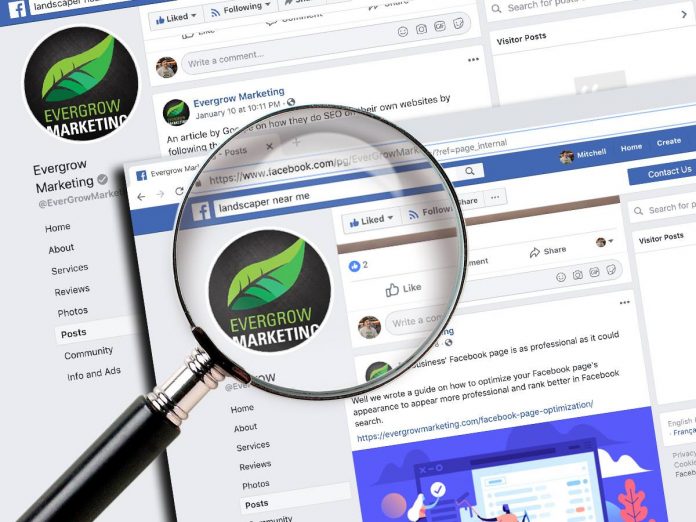 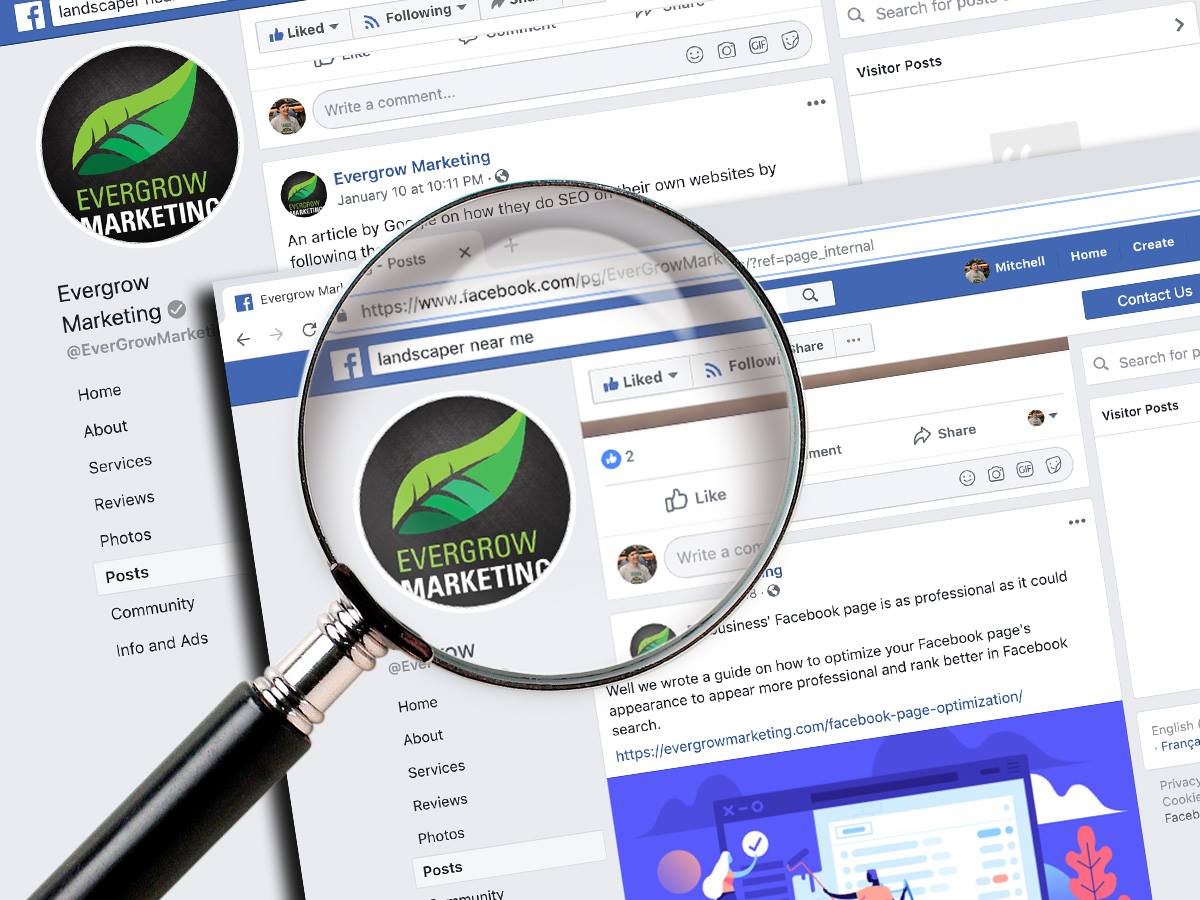 As soon as Facebook launched its Graph Search in 2013, it was only a matter of time before it became a big player in the search engine game.

But Graph Search was limited as far as optimization was concerned. The results it returned focused on providing an answer on the relationships between people, places, and things on Facebook rather than a link that contained what was likely the answer to your query like Google.

It was an IFTTT statement on steroids that never missed a workout.

It wasn’t until 2015 that Facebook became a major player in keyword search.

Since Facebook’s search was in its infancy at this time, testing sponsored results may have been too soon since search functionality was limited to page titles, profiles, games, etc…

So you couldn’t target based on keywords quite yet, nor could you take advantage of a searchers affinity. Which means the only way to target was by targeting another page or product. 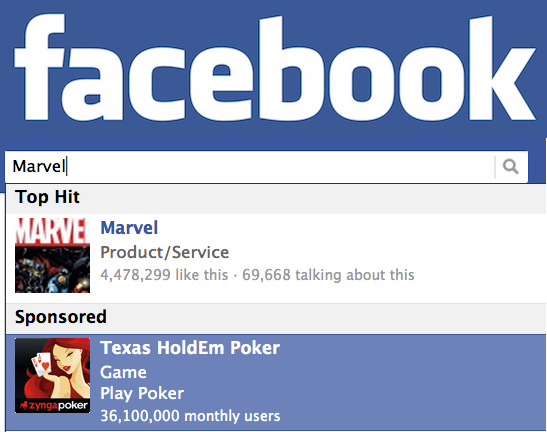 Sponsored results were short-lived as it turned into competitors targeting competitors relentlessly to steal traffic. In June of 2013, less than a year of Sponsored Results’ formal release, they were terminated.

Prior to 2013, Facebook Search had only returned results based on existing pages. There wasn’t much logic in the algorithm other than the name of the person or page you’re looking for in your query. That changed with Graph Search.

Graph search took pages, categories, and people and put them into a revolving wheel of filters that was heavily personalized to each searcher and returned different results for everyone. It even allowed users to use natural language like, “friends near me that like DC Comics” and return results for just that.

The two major flaws in this were:

This was the obvious next move by Facebook. They took what was already seemingly amazing at the time and added the ability to pull results based on keywords alone from your friends, people your friends have interacted with, or pages you like.

As far as a search engine was concerned, Facebook still had a long way to go to compete with Google.

Less than a year later, Facebook opens the floodgates in their search engine from inner-circle results to global, real-time, public news and posts. You could now search for any public post in their over 2 trillion indexed posts. Facebook now became a search engine that competed with the likes of Google for industry news and trending topics.

Prior to any real search functionality in Facebook, social media platforms were merely viewed as potential ranking signals and traffic boosters for your website.

Despite Matt Cuts denouncing the claim that Google uses social signals in their algorithm, Bing has gone the opposite direction about how they use engagement metrics from social media.

Facebook has been a solid directory site for local businesses to have their business page since 2007 when the number of businesses listed on the social media was only about 100,000. It allowed businesses to be in front of one of the fastest growing social media networks in the world, but the discoverability of your business was limited to mutual connections and brand awareness.

It wasn’t until 2014 when Facebook launched a new and improved version of the 2011 Places directory that Local Business Search became a focal point for Facebook to compete with Yelp and FourSquare.

Now, when searching for a company in Facebook’s Search that’s near you, you’ll get results that are eerily similar to the local 3-pack on Google. If we know anything about local 3-packs, it’s that there’s definitely an algorithm behind them that determines which businesses get to show up and in which order.

Facebook sees over 1.5 billion searches every day and over 600 million users visit business pages every day. They still have a ways to go to reach Google’s 3.5 billion searches per day. That said, claiming search queries just over 40% of what the search engine giant has — as a social media platform — isn’t anything to scoff at.

Facebook has provided a different means for customers to engage with brands than a typical search engine. But now the search engine has come to Facebook and the data shows people are using it. Not only to stalk their ex but also to find businesses.

The whole reason us SEOs are obsessed with SEO is that the value and opportunity it holds when 74% of buying journeys start with search engines during the consideration stage. If no one used search engines, SEO wouldn’t be much of a big deal. But they do and it is.

According to a survey by Square, 52% of consumers discovered a brand through Facebook. That’s a pretty significant number to be passing off.

And with the launch of Facebook Local in late 2017, the network is getting more discover-friendly.

Facebook has caught up with typical search engines and started implementing keywords in their algorithm and database. Bundle that knowledge with the fact that 600 million users visit business pages, and Facebook alone has a whopping 1.5 billion searches every day. It doesn’t take a genius to understand that Facebook SEO shows to be valuable in local business discoverability on the platform.

All we have to do is crack the code in optimizing Facebook business pages. Unfortunately, it seems Facebook is a bit more secretive than Google on what are and aren’t ranking signals in their local business Graph search.

It’s a matter of finding out why Facebook chose to rank Lightning Landscape & Irrigation over Dynamic Earth Lawn & Landscape, LLC when Dynamic Earth is both verified and closer. 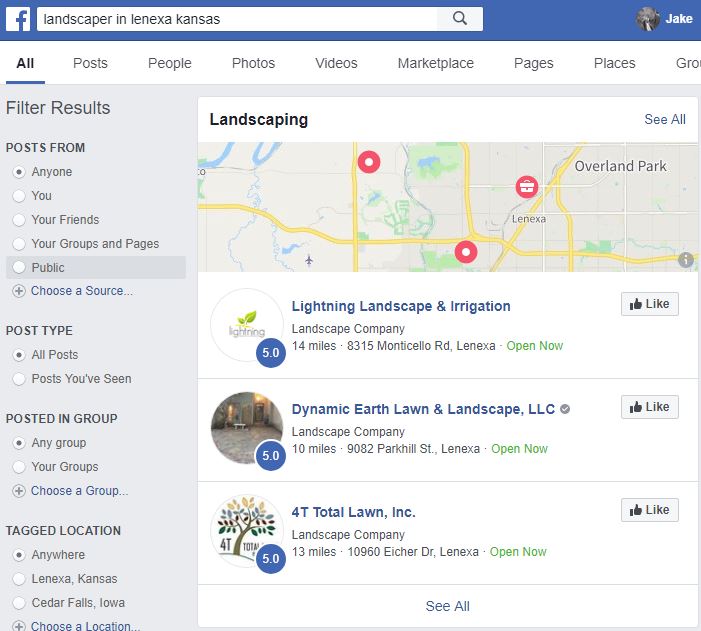 In most of my research, Facebook tends to heavily weight posts and pages based on user engagement. But it doesn’t mean other ranking factors don’t exist in search. We’re looking at around 200 ranking signals similar to Google, but also vastly different.

Trying to crack this code has led the idea of “optimizing your Facebook business page”, including myself. But most seem to be focused on optimizing Facebook pages to rank in other search engines rather than Facebook itself.

While it is definitely a good idea to follow SEO best practices for the former reason, why not do both?

Coming into 2019, Facebook has started beta-testing search ads. They’re not keyword-based yet. Rather, they serve as extensions of news feed ads and only on supported ad formats. It’s quite an improvement from the original search ads that were abandoned in 2015.

It’s the type of subtle testing that could definitely produce some useful analytics in pursuing a full-blown search ad feature with keywords.

Related: “Facebook is expanding into Search Ads. What will this mean?”

2) More and more people are using their search feature.

The fact that Facebook is testing this doesn’t really tell me anything about local SEO signals on the platform. But it does tell me even Facebook sees a real opportunity in their own search engine. And their analytics are probably better than what we have right now.

Without any solid advice from Facebook, I think it’s time for the SEO community to start thinking about organic brand exposure through the social media platform itself. We should start viewing it as an enhanced search engine as it continues to grow and improve its search features.

More so, without search analytics from Facebook, there really isn’t a lot we can do in regards to optimizing for placement. At least right now there isn’t.

I’d love to see their new search ads beta really get traction and prompt Zuckerberg to consider a more SEO-friendly approach to search marketing on his own platform.

Of course, this is going to give “social media gurus” another reason to clog up my news feed with ads.

Jake Hundley is the founder of Evergrow Marketing.

Five things you can do for free to boost organic search results. Tip #4: How just one word in a title can cause a 59% increase in organic traffic.

Gillette’s “The Best a Man Can Be” ad sparked lots of coverage. The real question is, “What impact did that video have on search traffic?” The trends since.

Getting SEO and front-end developers to work together can lead to spectacular success. Find out how this approach can take your strategy to the next level.

Four predictions on the SERP of tomorrow from the VP of Industry Insights at Yext. What we can expect, and what to do today to prepare. 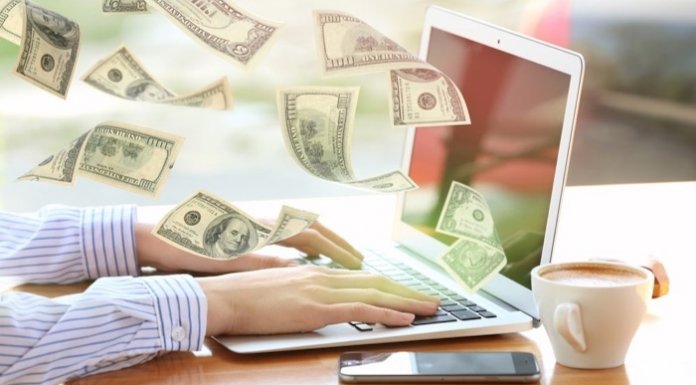 How to Make Money Blogging in 2021

A Definitive Guide to Geofencing