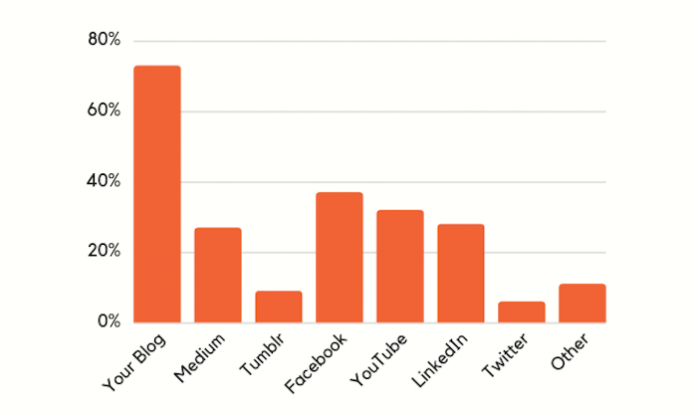 I started content marketing in the early days. So early that when I first met the WordPress founder, he had just raised $1.1 million for WordPress.

Fast forward to today and WordPress is worth over a billion dollars.

Similarly, when I first started with content marketing, there were less than 30 million blogs that existed and now there are over a billion.

In other words, things have changed drastically and now it’s what more competitive.

How many blog posts do you need to write? What are the best ways to monetize your traffic?

How can you ensure that what you are doing will work in the future?

To shed some light on where content marketing is headed, I’ve gathered data from 183 companies who are all leveraging content marketing. Each company makes at least 5 million dollars in revenue a year and generates less than $1.9 billion a year.

These companies are in all different sectors, from B2B to B2C, and are part of all the major industries out there. Most importantly, they have been leveraging content marketing for at least 8 years.

Now, I know many of you don’t have a company that generates at least 5 million dollars a year, but the stats and data I will show you are still relevant to your blog.

So, let’s dive into the stats to see where content marketing is headed.

What do you think has happened to social shares over time? 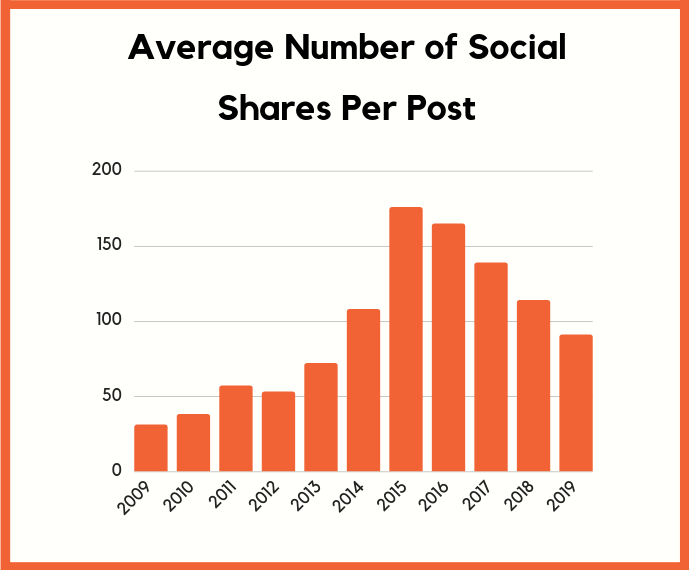 As you probably guessed, social shares have gone down because the algorithms (like on Facebook) really limit organic reach.

In the early days, people saw big lifts in their social share count due to the fact that these social sites were still growing in popularity. But once their growth slowed down, so did the number of times the shares each piece of content generated.

If you are wondering why just think of it this way… when people share content on social sites it drives users off of the platform. By keeping people on Facebook longer (or any other social platform), they make more money as people click on ads.

If you are expecting to grow your blog through the social web, think again. It’s slowly driving less and less traffic each year and you should expect it to get worse.

You need to take an omnichannel approach, but focus on search

Can you guess what’s the most popular traffic channel for a blog? 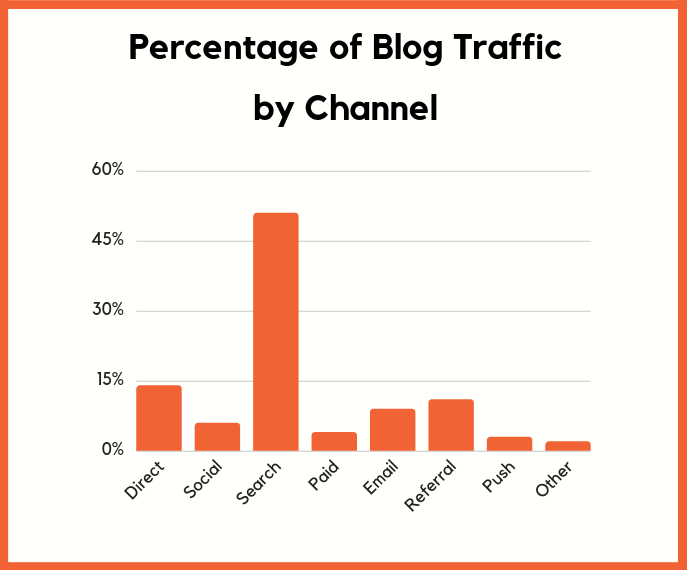 SEO made up 51% of the blog’s traffic and to no surprise, social media was the 5th most popular channel.

But what was surprising is that referral traffic was in 3rd place at 11% and email was at 9%.

Instead of just focusing on link building to boost your rankings, you should focus on link building to also increase your referral traffic. In essence, you can get more bang for your buck by increasing two different ways to drive traffic with one strategy.

Whether it is guest posting or generating PR, you should try and get as much referral traffic as possible as it creates steady traffic that isn’t too affected by algorithm updates.

As for email, you may think it’s dead, but it’s alive and kicking strong. Remember, everyone who works in the corporate world still uses email.

Don’t be shy about collecting emails. You can use tools like Hello Bar to do this with ease.

Now going back to SEO for a moment… here’s why you have to blog. 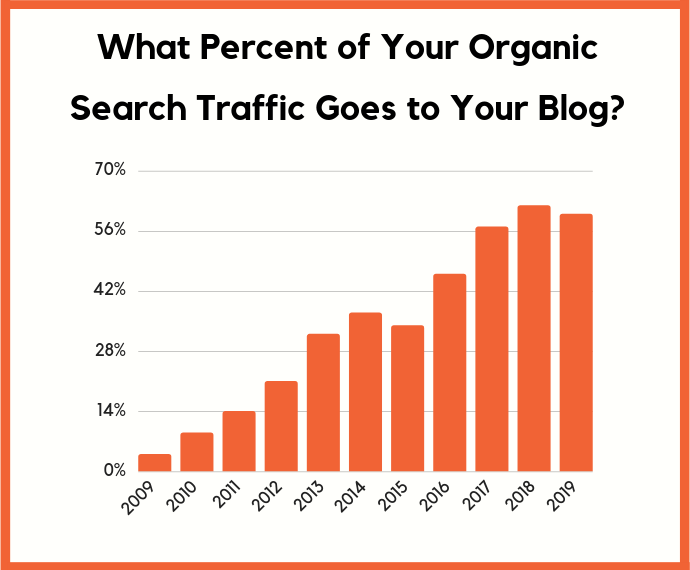 As you can see from the graph above, Google has continually shifted from ranking web pages to pushing up content over time. And it doesn’t look like that the trend is stopping anytime soon.

Blogs are generating, on average, 60 to 62 percent of a site’s search traffic. Sure, it’s going to be different for the Amazon’s of the world, but you aren’t them… and neither am I.

SEO is also getting more competitive because there are more blogs popping up and people are creating tons of content. But you have no choice but to do the same if you want to keep up.

Well, just look at it this way… 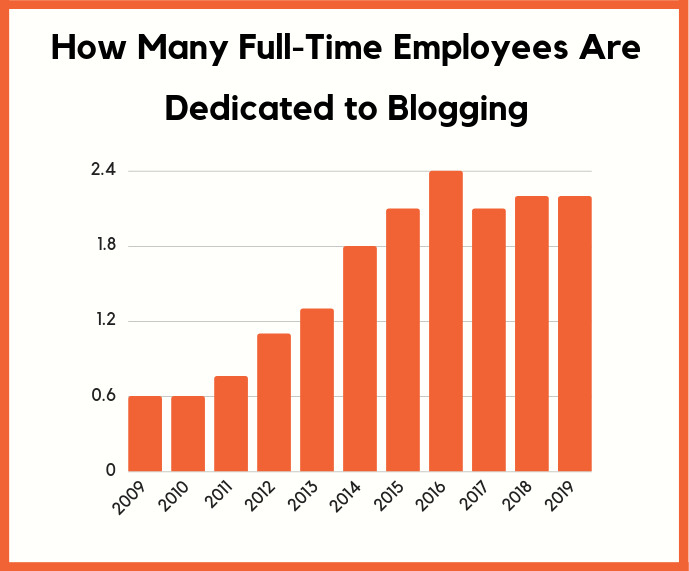 On average, mid-sized companies now have at least 2 full-time employees managing their blog. It’s because they know content marketing isn’t going anywhere without putting in real effort and you need to take it seriously if you want to grow fast.

And on top of having dedicated employees, the average mid-sized company has a bit more than 10 contractors working on their blog. 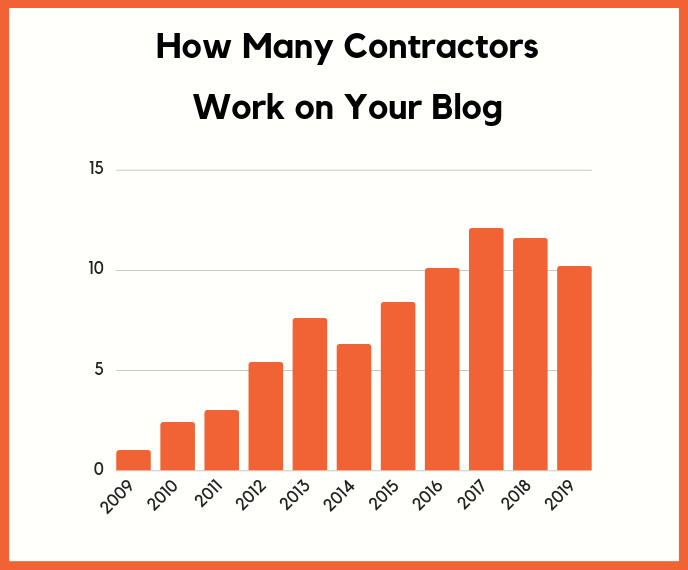 Now, I don’t want you to get scared by that number as a lot of those contractors are writing content. They are not working full time… it’s as simple as some of them writing only a handful of content pieces a month.

Or it could be as simple as them helping you produce video content or create infographics.

With your blog, you should consider hiring more contractors as writers instead of hiring full-time employees as it is cheaper.

It’s also more efficient to have contractors as you can scale up and down faster. On top of that, you’ll find that you will save money in the long run as contractors and consultant tends to be cheaper than full-time employees.

You need to write on average 5.7 articles a week

Out of the 183 blogs we talked to, they publish 22.8 pieces of content per month on average. 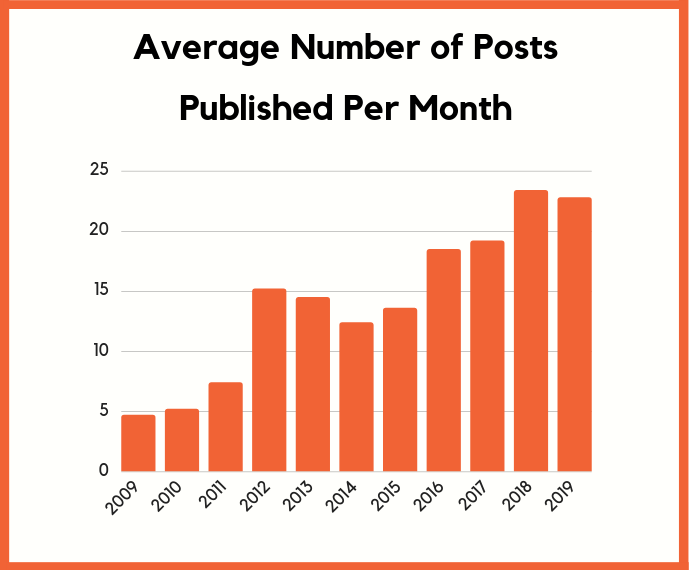 And can you guess how long each of them is? 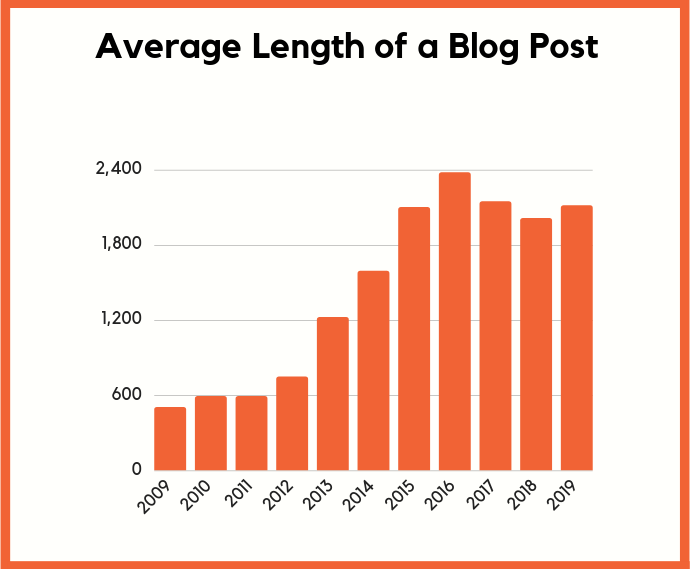 Well, they say that if you want to rank on page 1, you need to write content that is 1,890 words.

Most of the blogs we analyzed and talked to all followed one common theme… as time went on, they started writing longer posts.

They are now averaging 2,118 words per post. In 2016 that number peaked out at 2,381 words because people started producing in-depth guides, which caused that number to spike.

But what they found over time is that writing content that is too in-depth, such as guides, doesn’t necessarily guarantee higher rankings.

To give you an idea, years ago I wrote a 30,000-word guide on SEO. Can you guess what page it ranks on for the term SEO?

Now, this guide to SEO is much shorter and ranks on page 1. 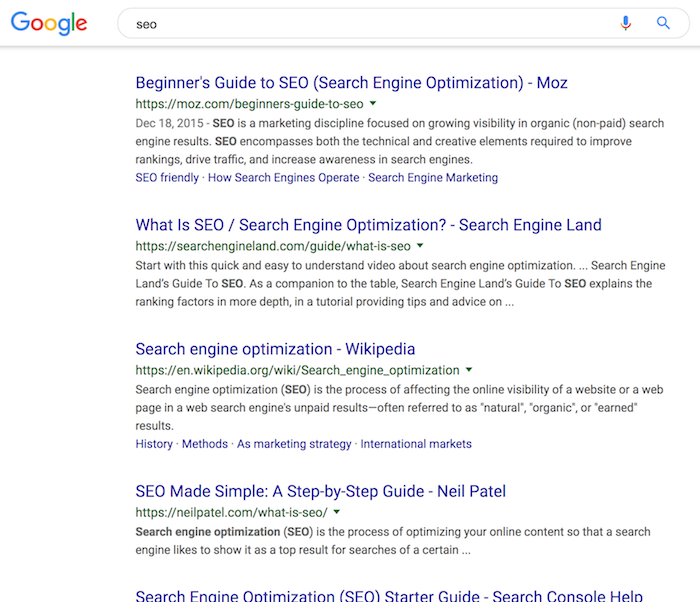 In other words, it is better for you to create more content than it is to create one super long blog post.

Think of your content as fishing hooks. If you have more fishing hooks out, there is a greater chance of catching a fish.

The same goes with blogging, the more content you create (assuming it is high quality), the higher the chance you’ll have of attracting more visitors. 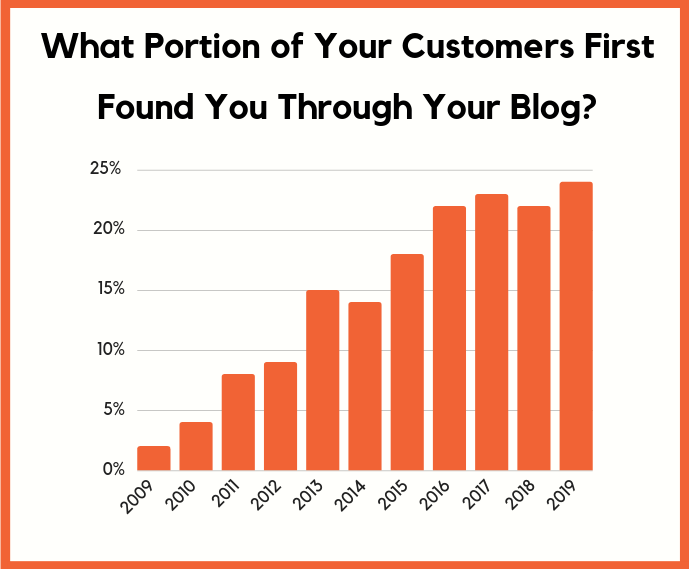 Think of your blog as a funnel.

At the top of the funnel, you want to attract as many people as possible. The more people you attract, the more revenue you’ll eventually end up generating.

As you can see from the graph above, 24% of customers first found out about the company through their blog.

Now, that doesn’t mean they converted into a customer right when they landed on the blog for the first time. More so, they learned about the company first through their blog.

Not only do search engines love blogs, so do people. And the trend is continually rising over time.

When someone reads your blog, it builds trust and causes your conversion rate to increase. 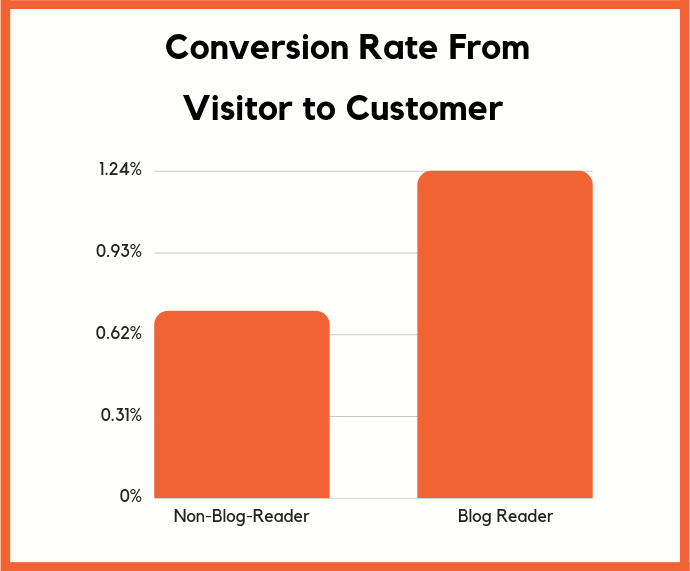 The graph above shows how someone who reads your blog is 74% more likely to convert into a customer compared to someone who hasn’t read your blog.

Advertising is only getting more expensive each year. By blogging more frequently, you can boost your conversion rates.

But don’t expect people to convert right away when they read your blog. 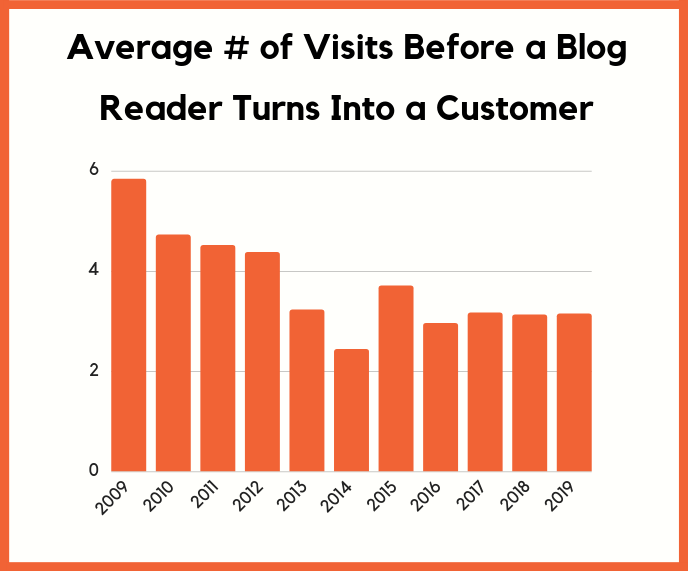 The average number of times someone needs to come back to your blog before they convert is 3.15 times and they tend to convert over a 2-week period of time. 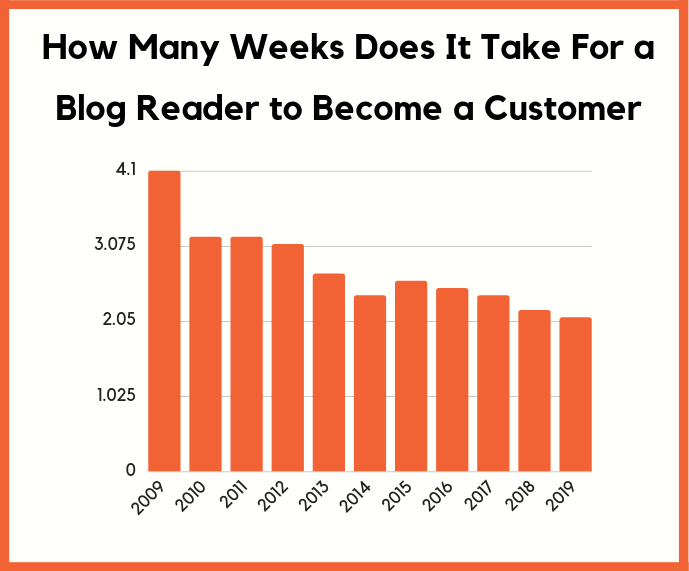 Now, you’ll also find that as you create content people don’t just open up their wallets and give you their money. You need to push them to convert.

The trend we saw is that blogs are leveraging more methods than ever to convert visitors into customers. 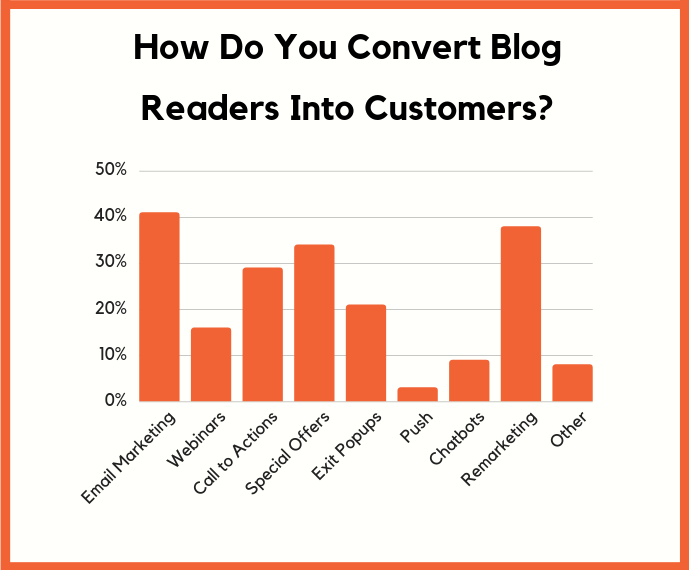 Email marketing is the main method bloggers are using, which isn’t a surprise. But the number 2 method is remarketing.

When I dug into it, these companies on average spend $51,409 a month on paid ads. And each year they saw their ad costs drastically increase. But what’s helped reduce their blended CPA is remarketing all of their blog readers.

In the coming years, remarketing will overtake email as the main way companies are converting readers into customers.

You’ll want to leverage this channel as well as it is much more affordable than search ads.

Growth opportunities are outside the United States

What countries do you think most blog readers are coming from? You probably are going to guess the United States or other native English speaking countries.

It used to be that way 10 years ago, but things have changed. 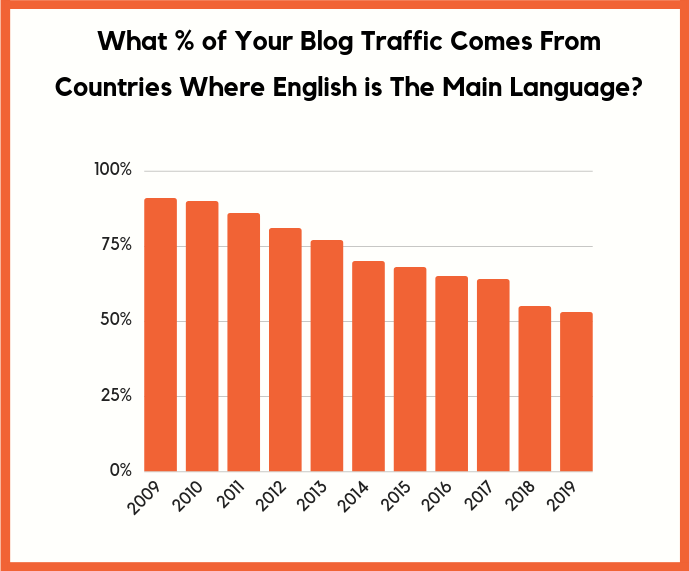 At one point it was 91% but now it has dropped down to 53%. This has also created a trend in which companies are now translating their content to different languages. 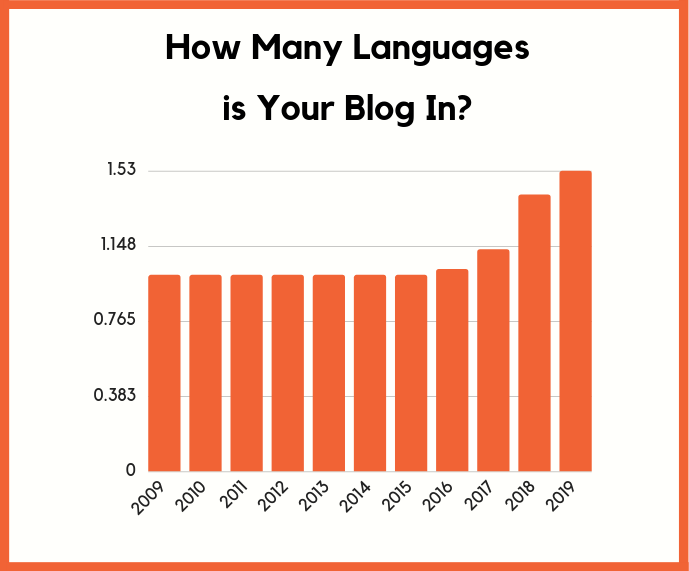 It’s taken a while for companies to adopt the concept of globalization with their digital marketing but now it’s catching on fast.

I was able to ride the trend before most people because I got pushed to do so by a Google employee. It was the best marketing advice and it seems to be true for pretty much every blogger out there. 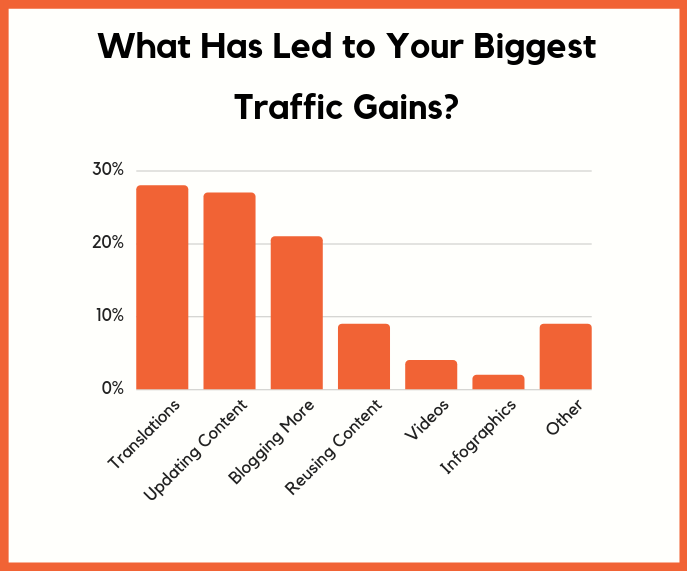 As you can see from the chart above, the biggest traffic gains content marketers are currently getting are from translating their content into multiple languages.

The second biggest gain is coming from updating old content. Content marketing is no longer a game of cranking out hundreds of articles a month. If you want to continually do well, you have to maintain and keep your old content up to date.

When you are building out your content marketing team, focus 50% of their effort on updating old content.

The last biggest trend is WordPress isn’t the only content player these days. If you are going to write a blog post, might as well get the most traffic by placing it everywhere. 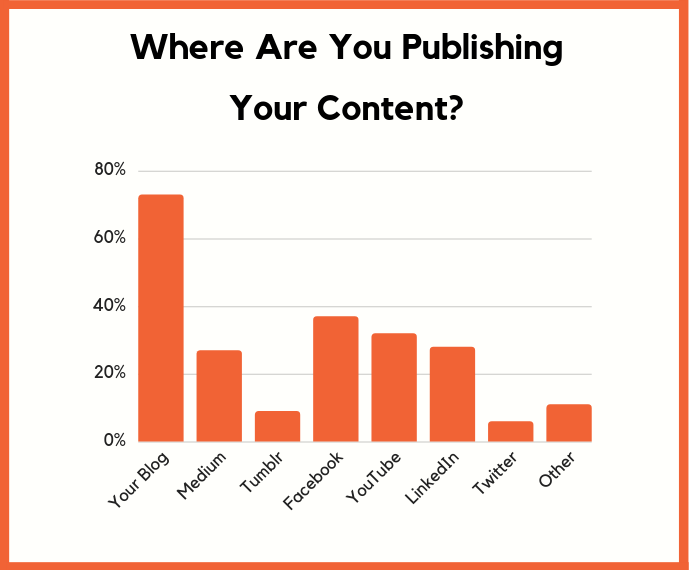 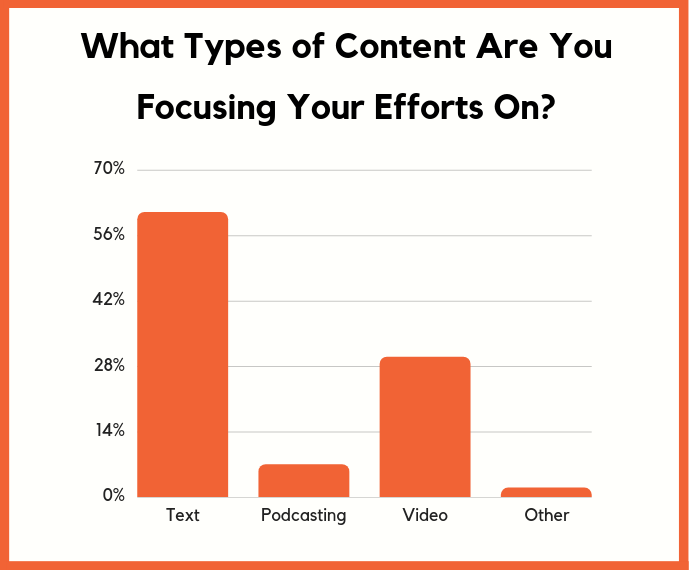 You’ll see huge growth in video and audio content over the next few years.

Because of that, their algorithms are acting more favorable to content types that keep people on their platform and engaged for hours… hence, you need to expand outside of just text-based content.

It’s also why I’m big on YouTube right now. It diversifies your traffic sources in case you get hit by a Google algorithm change.

If you are going to take one thing from the charts above, you need to focus on translating your content to other languages as it isn’t as competitive.

In addition to that, you need to focus on creating video and audio-based content. Videos have already starting to take off, podcasting isn’t there yet, but it will within the next few years.

I would also tell you to blog, but you probably already have one. 😉 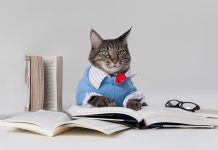 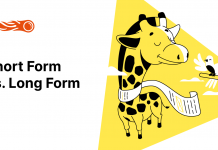 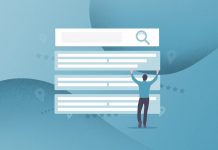 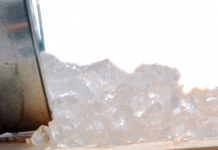 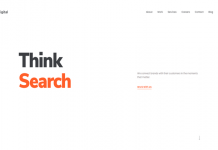 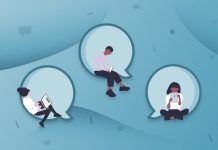 How to Turn Viewers Into Customers

What is Google My Business? The Ultimate Guide to GMB Listings

How To Force Q&A On a GMB Page That Doesn’t Have...